There are few people with more reason to be angry, or to hold a grudge than Joesph. These people were his brothers, but they were also the ones he had begged for his life.

Giving grace is hard enough in an average day. We tend to hold on to grudges for way to long.

As we read in Mark, Jesus asked for forgiveness for those who were crucifying Him. He knew He would rise again. Mary was taken by surprise when the stone was rolled away, but Jesus wasn’t.

The difference between Jesus and Joseph is, Jesus knew the outcome. The reason for everything that was happening. Joseph had to walk completely by faith.

Joseph had had a dream that his brothers would bow down to him. At this moment he could have simply said, “Didn’t I tell you so.”. Instead, Joseph was moved to be kind to them. To give them what they ask for and more. It wasn’t about what they had done to him. It was about his own heart.

In a world of family, friends, and even strangers who can be hurtful, even hateful, we must be willing to give the grace and mercy that we are given.

Today’s Prayer: Father, I want to be more like Jesus and Joseph. Convict me when I am quick to anger, or slow to forgive. In Jesus name, Amen. 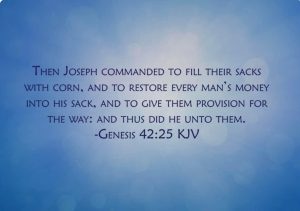